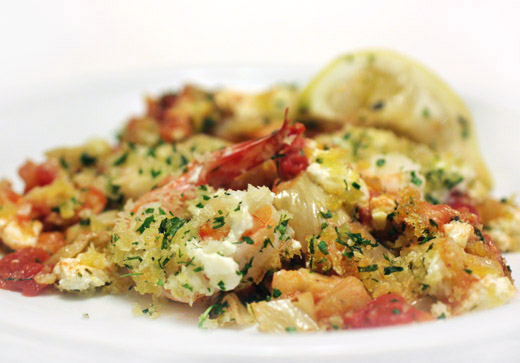 It happened again. I was watching an episode of Barefoot Contessa, oddly enough it was one I hadn’t seen before, and as usual, right away, I was compelled to make the thing that she had just made. She was preparing lunch for a friend. There was sauteed fennel and a splash of white wine and a little Pernod, diced tomatoes, shrimp, feta, and breadcrumbs. Things were sauteed on top of the stove for a few minutes, and then the dish went in the oven for just enough time for the shrimp to cook through and the breadcrumbs to brown. She brought it to the table in the pan straight from the oven. It was easy and fun. I had to do this. The recipe is on the Food Network site, and it’s also in her book Barefoot Contessa How Easy is That?

In that same episode, she and her friend also made an incredible-looking salted caramel ice cream for dessert. I’m not sure why, but that recipe is nowhere to be found on the web site or in her book, or I would have made that too. [Update: Thanks to a commenter, the recipe was found. It's on the Barefoot Contessa site. Wish I would have thought to look there!] But, back to the shrimp. I made this for dinner the next night. The shrimp, fennel, and tomatoes were scooped onto plates and served with bread for dipping into the sauce exactly as Ina had served it. It was casual, great for summer, couldn't have been easier, and tasted like it should have involved much more effort than it actually did.

This goes quickly, so you'll want to have all the ingredients prepped and ready. First, diced fennel was sauteed in olive oil, and then minced garlic was added. White wine was used to deglaze the pan, and then canned, diced tomato, tomato paste, and some oregano were added followed by just a tablespoon of Pernod. It really does add nice, anise flavor with just that small amount. This mixture was left to simmer for about fifteen minutes before the shelled and deveined shrimp were set on top. Crumbled feta was strewn about the pan, and then a mix of breadcrumbs, parsley, and lemon zest was sprinkled on top. The saute pan went into a 400 degree F oven for fifteen minutes, and then it was served with lemon wedges and bread. 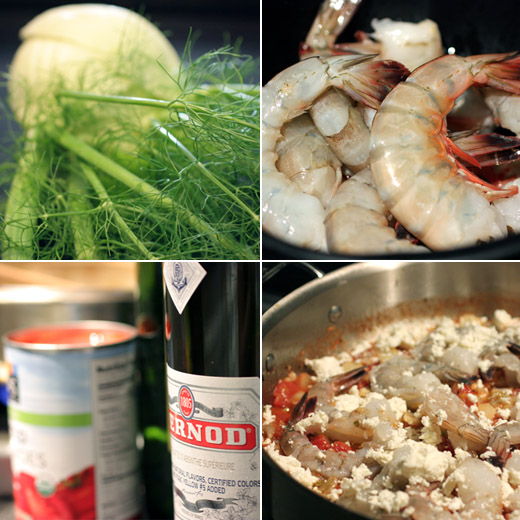 I don't think I've ever made a Barefoot Contessa dish I didn't like. Sure, sometimes a disconcerting amount of butter is involved, but not in this case. Here, the shrimp and fennel were fresh and light with just a little richness from the feta. With some toasted sourdough bread on the side, this meal was as easy, fun, and casual as it looked like it would be. 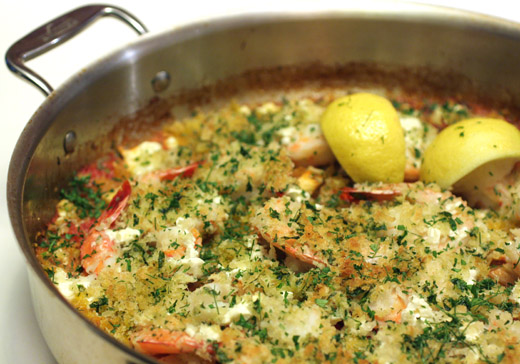