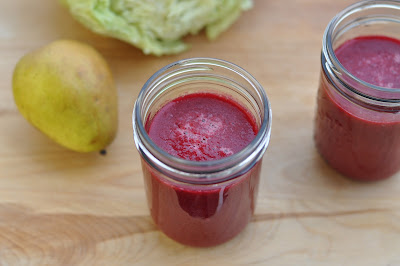 What? Beets in a smoothie? I know that may sound interesting, but it is truly delicious as long as you use a smaller sized beet. Too many beets in a smoothie causes it to become inedible, at least for my taste buds. The beautiful purple hue coming from the cherries and beets is very appetizing. At first sip, you'll be hooked. This recipe is perfect to use during the detox phase of The Elimination Diet.

Why is this a detox smoothie?

Pears:
Pears are an excellent source of soluble fibers. These fibers act as a sponge to mop up toxins that are released from the liver via the bile and excreted into the intestinal tract. Once they are mopped up, they can be easily excreted out of the body. If there is no soluble fiber around, some toxins are more likely to be reabsorbed in the intestines and cause more havoc on your body.

Beets:
Beets have unique detoxification support chemicals, call betalains, that help the liver process toxins while keeping antioxidants levels high. These magical compounds are best preserved when beets are raw or cooked lightly. Speaking of antioxidants, beets are a surprisingly good source of the potent carotenoid antioxidants, lutein and zeaxanthin.

Cabbage:
Cabbage has long been known as a fantastic food for the reduction of cancer risk, and for the healing of the intestinal tract. It turns out that there are numerous factors that play into those abilities. These include the beneficial fibers in cabbage, the content of glutamine (an amino acid-like substance used by intestinal cells for healing), and a high content of miraculous compounds called glucosinolates. Glucosinolates are sulfur containing molecules that have glucose attached to them. When you break open the cell walls of cabbage, an enzyme is released called myrosinase that removes the glucose from the sulfur compounds commonly called isothiocyanates. One of these isothiocyanates, sulforaphane, has an amazing capacity to turn on a part of our genes called the Antioxidant Response Element. When it does this, we start producing more antioxidant proteins, and detoxification proteins (enzymes actually) that provide us 72 hours of protection from environmentally and internally produced toxins. Some doctors from John's Hopkins are saying that sulforphane may be one of the best known cancer protective substances on the planet.

Cherries:
Another super star loaded with beneficial detox promoting fibers, cherries have their own stockpile of antioxidant chemicals. The beautiful maroon-colored anthocyanins packed in the skins and flesh of cherries not only quench free radicals, but also have a dampening effect on COX2, a potent pro-inflammatory enzyme. Instead of aspirin, perhaps we should be eating cherries?!

This smoothie recipe was inspired by Diane's Cherry Smoothie with a Secret and Melissa's Cherry Cabbage Chia Recovery Smoothie. Thanks gals!
Read more »